Reduce your energy costs with

Gardner Energy has been designing and installing micro-hydro systems for the past 18 years. Ken Gardner completed his civil engineering master’s program in hydro power at BYU. He completed a reconnaissance study for a hydropower system for the Sundance ski resort near Provo, Utah as part of his degree. Ken is a civil engineer, structural engineer, land surveyor, master electrician, renewable energy contractor and electrical contractor. He has expertise and experience in water right acquisition; licensing; stream diversion design and screening; pipeline and appurtenances design; turbine selection and installation; electrical control design; utility interconnection and commissioning. He has also provided design, installation and oversight for the installation of over 1,000 solar electric and wind electric systems.

Over the past 18 years we have installed 20 micro hydro systems in the intermountain west. We currently have four projects in planning, licensing and design stages which will be constructed next spring.

Micro hydro power, just like solar power, can be designed for grid-tie with net metering, off-grid and grid-tie with battery backup. We typically design micro hydro systems to meet the customer’s needs even though at times the potential exits to generate far more power than is needed. Because hydropower operates 24 hours a day a small system can provide enough energy for residential or small commercial customers. We often design systems for new homes to provide excess available energy for preheating water for a radiant floor heat system which saves the customer on propane costs.

Every project is site specific with multiple hydro turbine applications and designs. We are always sensitive to environmental concerns and impacts which are addressed early on in any project

Moving water has the potential to generate hydroelectric power, which like solar power, can be used to offset energy needs. Most often water in a pressurized pipeline is used to generate hydropower though devices are available to generate power from surface water flowing in a stream or channel.

Micro-hydroelectric turbines can be as small as 50 watts with more common sizes ranging between 500 watts to 4,000 watts. A rough method of determining how much power is available in a pressurized pipeline is to multiply water flow in gallons per minute (gpm) times the elevation difference in feet from the pipeline inlet to the pipeline outlet (head) and then divide by 11 which will equal watts of available power. As an example 30 gpm of water x 200 feet of elevation difference / 11 = 545 watts. Hydropower has the advantage of producing power 24 hours a day year-round depending on availability of water. It is always important when diverting water from a natural stream to leave sufficient water for wildlife. Also it is best to only generate power for your needs even if a greater potential exists.

Micro-hydro turbines can be placed in small buildings, underground vaults or placed in the open. Power can be transmitted thousands of feet from the generation site to the site of use. Much like solar power, hydro turbines can be operated off-grid with a battery based system. They can also operate as grid-tied with battery backup and as grid-tie only without batteries. 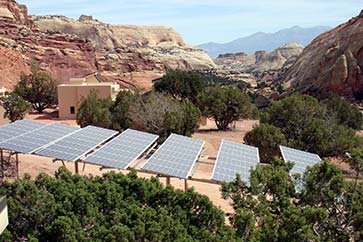 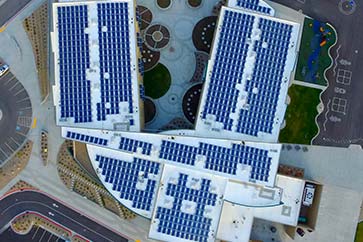 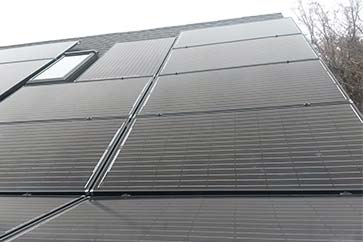